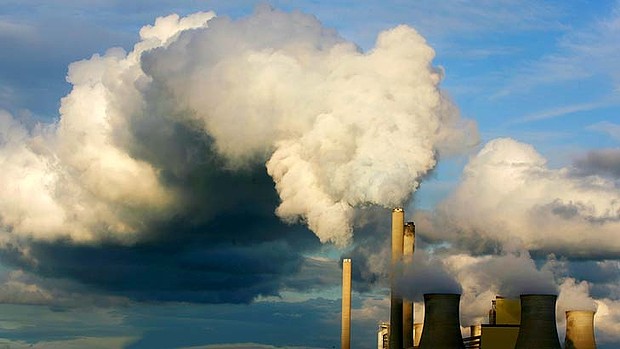 Every year, the human race emits billions of tons of waste gases into the atmosphere. Regardless of who is right in the present debate relating greenhouse gases (GHGs), global warming and climate change, common sense says it’s time to stop choking the atmosphere with waste gases. Unfortunately, our industrialized society can’t suddenly “just say no” to things like automobiles, synthetics and electricity because we are all utterly dependent upon them. Although our society has shown a willingness to restrain, each one of us on average still emits tons of GHGs per person per year into the atmosphere, far more than anyone else on the planet. Other societies who share this planet’s atmosphere with us will become fully industrialized, and if they treat the atmosphere as badly as we have, then the yearly global atmospheric GHG input will increase at least an order of magnitude from today, for decades into the future, until…

Those can be scary thoughts, and Millennium Energy Inc. (MEI) is prepared to do something about excessive GHG emissions, especially waste CO2 from refining and power generation. Not as alarmists, but as scientists who understand technology. MEI believes we must begin right here at home developing the new technologies and integrating the processes and systems which we industrialized nations will share with the rest of the world in an effort to reduce the amount of GHGs released into the atmosphere every year.

MEI has added to its corporate goals to strive for zero net GHG emissions in its own energy operations; to develop the systems and synergies required to retrofit and rebuild the industries which emit GHGs; and to ensure that emerging economies are aware of the alternatives to reckless emission of waste gases. A major new yardstick which MEI will employ to measure its corporate progress will be the amount of GHGs which we have stopped from entering the atmosphere by storing away what otherwise would have escaped, or by converting existing GHG emitters to being less so, or by directly harvesting GHGs from the atmosphere for storage.

It is MEI’s position that there is a vast under-exploited market for waste CO2, the major GHG component, in enhanced oil recovery (EOR), and that EOR is GHG capture and storage. In certain parts of the world, large sums of money are routinely invested drilling wells into rare underground deposits of CO2 gas, and then producing and transporting it to nearby depleted oil fields for re-injection to enhance oil production. MEI believes that CO2 discovered in the ground should be left there, and that our industries’ resources should be directed at retrofitting existing infrastructure, like power plants and refineries, to capture man-made waste CO2, and then piping the CO2 to an old oil or gas reservoir for injection and long term storage.

Many billions of barrels of oil and trillions of cubic feet of natural gas have been produced to date from oil and gas fields here in the US, so there is theoretically “space” in those depleted underground reservoirs to put back an equivalent volume of GHGs for long term storage. Since much of the oil and natural gas produced by the energy industry has been trapped below the surface of the earth for millions of years, any replacement fluids and gases should be safe there for a very long time. The IEA Greenhouse Gas R&D Programme estimates there to be enough storage capacity in the world’s depleted oil and gas reservoirs to store 25 to 75 years worth of global CO2 emissions from energy production. Intuitively, it also seems that the economic viability of CO2 storage projects in old oil fields is enhanced because the “plumbing” already exists in the form of tens of thousands of wells, abundant processing plants and compressor stations, and thousands of miles of pipelines, some leading directly to power plants and refineries which are prime sources of man-made CO2.

CO2 injection into oil reservoirs is not a new concept. On a limited basis for many years, oil companies have flooded select old oil reservoirs with CO2 in an effort to recover more oil from the reservoir. Usually, most oil is left in the ground when an oil field is abandoned, and CO2 flooding is one Enhanced Oil Recovery (EOR) method the energy industry employs to flush more oil out of the ground. It has been estimated that there are hundreds of billions of barrels of oil left in the world’s reservoirs depleted by conventional means which might be flushed out by CO2 flooding. Unfortunately, CO2 floods have relied almost exclusively on rare natural CO2 gas deposits found (usually by mistake when looking for natural gas) in the ground, which are then produced like natural gas and piped to an oil field for injection.

MEI feels that if the economics are right to drill new wells and produce, process, transport and inject CO2 into old reservoirs for EOR, then the economics must certainly be right to capture produced CO2 at man-made emission point sources like power plants and refineries, and then transport and inject it the same way into those same reservoirs, especially if any value is put on saving the atmosphere.

It seems a simple concept – just bend the tall power plant smokestacks over and point them down into the ground and refill the “empty” oil and gas reservoirs. As experienced professional scientists, the management at MEI knows it will take a much more complex system to separate, collect and contain all the caustic gases and fluids racing through pipes at high pressures and temperatures. And of course not every old oil field is near a power plant or refinery and not all oil reservoirs will be geologically viable. However, as scientists we also know that all technical questions can be answered and put into economic models, and that all problems can be solved with enough economic incentive.

Lack of both vision and economic incentive have hindered GHG harvesting or capture for EOR in the past. However, in the future, government mandates, incentives or even penalties may make CO2 capture and storage economic by itself. In opposition to change, it will be argued that large sums of money are required to capture and transport the CO2 and lots of energy is needed to pressure up CO2 for injection. But the oil industry already spends that kind of money in West Texas, for example, producing and transporting naturally occurring New Mexico CO2 hundreds of miles and injecting it into reservoirs as deep as 10,000 feet. So why don’t we leave the CO2 in the ground in New Mexico and capture some of the overabundant waste CO2 from power plants and inject that gas instead? For one thing, the environmentalists and the energy and power industries are myopically spending their time and resources refuting the other’s need to exist instead of working together on the technologies of man made CO2 sequestration. Secondly, New Mexico generates $30,000,000 in CO2 sales each year to flood oil fields, and a sizable industry exists with lots of jobs at stake. A better use of our resources is to demonstrate an economically viable alternative, such as capturing waste CO2 from refineries or power plants for EOR injection in geographic areas where there are oil fields in need flooding, and no ready sources of naturally occurring CO2.

It has been estimated that a power plant would spend as much as 50% of its total power output to capture and store all of the CO2 it produces. Would anyone pay twice as much for power if it was 100% clean, nonpolluting power? Perhaps not twice as much, but people have shown a willingness to pay more for “green” power, even though that “green” power is not actually delivered to them. Also, the 50% figure quoted above was estimated by the big CO2 producers who are resisting change, so 50% power loss is probably an overestimate based on the worst case economics of burning dirty coal, which we all admit must be replaced by burning natural gas as soon as possible. Economic, nonpolluting renewable energy technologies are progressing, but the infrastructure to supply all the world’s masses with this new energy is generations away. We must start reducing GHG emissions now, and by utilizing existing infrastructure to capture and store GHGs in old oil fields, in hand with fuel switching, conservation, and increasing efficiency, we can start making dramatic reductions now and be a good example for the rest of the world.

MEI took its position on GHG emissions because the owners of MEI are naturalists concerned about our planet’s environment. The Chairman, a geophysicist with twenty years experience in the search for new energy resources, has been worried about climate change and atmospheric chemistry since the late 1970s when he participated in pioneering expeditions to remote locations of the world gathering evidence of past climate change from arctic and alpine glaciers. MEI’s president, as a geologist with twenty years experience developing energy resources, and as a life long southern California surfer, diver and beach enthusiast, has witnessed first hand the reduction in aquatic life off our coast. The corporate secretary, from northeastern India, has watched her once jungle-covered homeland deforested in her lifetime, the rivers dammed, the wildlife gone and the air quality destroyed. All three are aware however, that with technical innovation and political action, things can change for the better, like aspects of our air quality in southern California which have been dramatically corrected over the past few decades.

MEI was formed in 1994 to systematically expand a global reserve base of natural gas, oil and integrated power generation capacity into the next century. Starting here in North America, MEI plans to expand into Asia to help develop under-exploited natural gas reserves and to use the gas to produce power. Natural gas as an energy source is environmentally friendly and we hope to persuade governments, industries and individuals to switch to gas from coal, oil and wood. Natural gas development is far less damaging to the environment than mining or clear cutting for foreign investment, and as a fuel source for power generation it emits a lot less GHGs than coal or oil and is a much better alternative to massive hydropower projects. If, for example, tens of millions of individuals in India switched from wood to natural gas for cooking at home, we could dramatically reduce deforestation in that country.

We then came to the profound realization that, if MEI attains its dual corporate goals of reserve ownership and power generation, we will find ourselves in the unique position to act responsibly regarding GHG emissions, especially CO2, because we will be both a prime source of CO2 emissions from our power generation and other operations (the problem), and we will also be the custodian of the world’s best, proved CO2 storage sites – the old oil and gas fields that energy companies have been producing from continuously for over a century (the solution). To our original corporate goals we have added the directive to “close the energy loop”, to capture the waste gases from our power generation and from the refiners of our oil and to put those gases back into the very same reservoirs from which we produce our fossil fuels.

MEI knows that the technologies already exist to capture CO2 at anthropogenic point sources and to transport and then store CO2 in depleted oil and gas reservoirs. We can’t understand why the oil industry, much maligned over the years as an enemy of the environment, hasn’t taken the initiative to aggressively capture and store CO2, reap the benefits of the EOR effect of GHG storage, and then loudly proclaim their good environmentalist deeds to the world. We can only conclude that the terms “oil and gas industry” and “environmentalism” are perceived as existing in separate parallel universes, unable to coexist. The principals at MEI are environmentalists and energy company executives and we plan to change people’s perceptions and priorities in the 21st century.